The Spice of Shabbat – Spiritualizing Matter

Rosh Hashana is at our doorstep, and in Judaism that means a time of self inspection  and repentance. Several things help us “push” ourself towards ourselves, help us see ourselves as we really are – and do something about it. One of them is a musical instrument called the Shofar – a hollow ram’s horn in which we blow on the day of Rosh Hashana a traditional  sequence of sounds.

There are several explanations as to how that works, how exactly the Shofar  aids us repent. But I want to approach this through a story, a sort of fable, which came to me one Rosh Hashana early in the morning, while thinking what on earth am I going to speak on my sermon after Torah lecture at Synagogue. It goes like this:

There were a king and a queen who were for many years childless. Then, there came a time when it was announced that the queen is pregnant at last, and a child was born – a baby boy. One day the queen walked the palace’s grounds with her beloved child prince in her arms. Suddenly there began a windstorm, culminating in a tornado which snatched the baby from her hands, sucking it away, up into the sky, and out of sight. All the people of the kingdom volunteered  to the task of finding the baby, but nothing was found. It just vanished. Well, not really. Because the turbulence flew the princely kid some miles away and finally landed him, very softly, perfectly safe, at the doorstep of an elderly childless farmer and his wife. The farmer’s wife heard that morning strange noises coming from outside and when she opened the door she saw a lovely baby diapered in rich baby-cloths with an embroidery of an emblem she couldn’t  recognize. She was smart enough to understand this was no ordinary babe, but after looking well around the house and finding no sign of its parents, she deduced this was somehow, rich or poor, an unwanted boy. She was of course very happy to adopt the child and so was her husband. They hid the fancy baby clothes in the attic and began their new life, with the kid who fell from heaven. Years have passed and as the child grew he was gradually initiated into all the works of the farm, and he liked it. But something troubled him. He felt like he somehow didn’t really belong…

More years have passed and the king passed away. About that time, the adopting mother who was really consumed by remorse all those years because she could never really shake the feeling that she should have investigated more into the whereabouts of the child’s abandoning parents, decided she must tell her son the truth. He was now old enough anyway, to know the truth about himself. She called him one day and told him she and her husband were not really his  parents, and that he was found abandoned on their doorstep, and was apparently of noble descent.  The boy just couldn’t believe her. He didn’t want to believe her – life at the farm was too good, even if it felt a bit misplaced. The”mother” had to prove it to him. So she took him to the attic and showed him the baby clothes he was found in, and the emblem which was embroidered on them. The boy, who was more educated than his mother, instantly recognized the royal signs and understood what it meant. He understood he had to go back to the palace and claim his throne. He was also enough informed in politics to know that if he didn’t do this, if he decided to stay in the farm with all its  pleasures and chores, the throne will not remain vacant. And really, there was an evil Wazir (counselor) who  coveted the kingdom’s throne for years and just waited for the king die so that he could take over. And that would really be bad!

We sincerely hope the boy did what he had to do, but unfortunately the story ends here, and you’ll have to complete it yourselves…

What does all this mean, and how does it explain the meaning of the Shofar?

I’m sure that whoever heard the Shofar on Rosh Hashana has some ideas how to decipher my parable.

The son of kings, the princely babe is – us. In this world we feel fairly at ease in “the farm”, in the material world. However we do feel an uneasiness that we try our best to repress. But there’s comes a time (actually every Jewish new year) when when we are shown our emblem, and can no longer deny where we really belong. The sound sequence of the Shofar is a picture of our selves.

Listen now to a full sequence of Shofar sounds I’ve recorded. Try to picture the structure of this “music”. The notes, the pitches, are irrelevant; just the order of sounds.

As you’ve probably heard (you can always try again after reading this) there are three mini sequences which are actually three variations of the same structure: a straight long sound, then a vibrating sound, and again the same line like blast.

We begin in heaven, where our souls are imbedded in His Throne of Honor. There we experience the bliss of His proximity. But we lack something. Because everything we receive there is just charity –  we’ve done nothing to earn it. And just as a beggar who receives a piece of bread has no real pleasure in it, as he is shameful and cannot look at his donator in the eye, our souls cannot completely enjoy their bliss at being there. Therefore, we descend down into this world,where we can toil and labor, choosing spirituality in a material world, fighting temptation to make matter our goal in life. Then, if we win the struggle, we are promised a return to our previous state of proximity to Him, in Afterlife, or a the end of Time, when everything will be finally corrected and good. Only then, what we receive – we receive as due payment and not as charity, with no shame to “look at the benefactor in the eyes”; only then our bliss is happiness are complete.

That’s exactly as shown in the diagram of Shofar Tekiot (blasts); simple sound, disturbed sounds, and back again to simple. The Shofar Tekiot is the diagram of our lives. And seeing (hearing) a musical picture of ourselves, reminds us of who we are, and what we’re supposed do in life. We become better,or at least aspire to be better.

May we all have lovely good year , doing what we ought and fulfilling ourselves!

I will probably republish this next year also, but this year I’m a bit behind schedule. So please be quick to share this, because I really want it to get to people before Rosh Hashana; I think it could really make a difference when we listen to the Shofar this year… 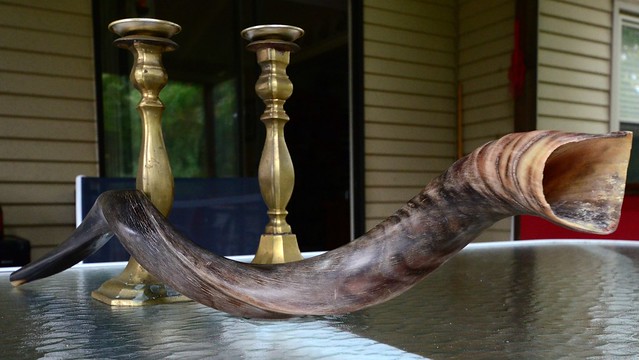 Quick Fish Casserole, or What to Do When Your Oven Short Circuits

Not strictly Shabbat, because it’s an eBook… Nevertheless – inspiring

Seeing things as they are is not always pleasant. But sometimes we have no choice…